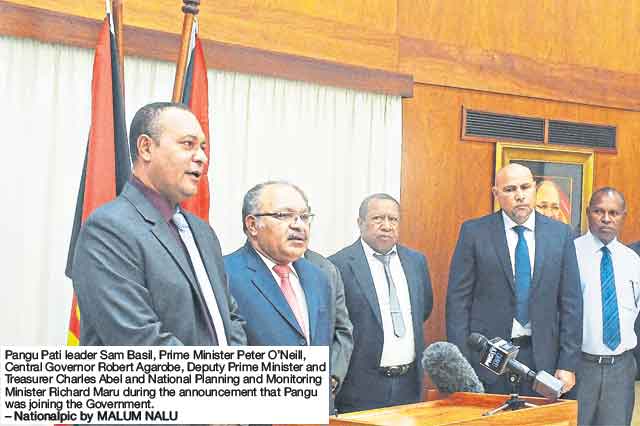 Basil thanked O’Neill “for inviting Pangu to the PNC-led government”.

“There are 12 of us. And as you can see, 10 of us are from the original Pangu team while two others have joined,” Basil said.

“We will be joining hands with PNC to help implement policies, to help the Treasurer (Charles Abel) make sure that the 100-day (plan) is supported for good economic policies for Papua New Guinea.

“Pangu Pati, in the next few days, will put advertisements in the papers explaining our move in detail. We want the speculation to be put to rest.
“We have made out decision and we are happy to be joining hands with PNC in running this country for the next five years.”
It takes the number of MPs in Government to 72.

He said Pangu was “one of our oldest parties in the country”.
“It went to the elections with some very solid and strong policies that our party PNC and the Government acknowledges,” O’Neill said.
“People want those policies to be incorporated into the running of the country over the next five years.
“We’ve agreed that we will take on board all the issues that they have stood for in the elections.

“We want to work together in making sure that we deliver that to the expectations of our people. Our people expect our leaders to work together.
“It has been for a long time that no single party has been able to muster the numbers on its own to form a government.

“Governments in future will also be coalition until such time where there is an opportunity for one party to form the government by itself.
“In order for us to pass important legislation and important constitutional amendments in Parliament, it is always important that a government must have a good, solid majority.”

O’Neill said many of the Pangu MPs were “first-timers and making a strong decision today that may not please many of their supporters”.
“I want to urge those supporters throughout the country, whether you are a PNC supporter, a Pangu supporter or a coalition partner supporter, to put all out differences aside,” he said.

“Our country needs us most today (and) expects the leaders to work together. And we expect our supporters to work together as well.
“That is why I’m very pleased that the Pangu leader has announced today that they will be joining government.
“We look forward to working with them.

“We will make sure that they become a solid part of our team over the next few years until we go to the elections in 2022.
“We will continue to deliver for the good of our country.”