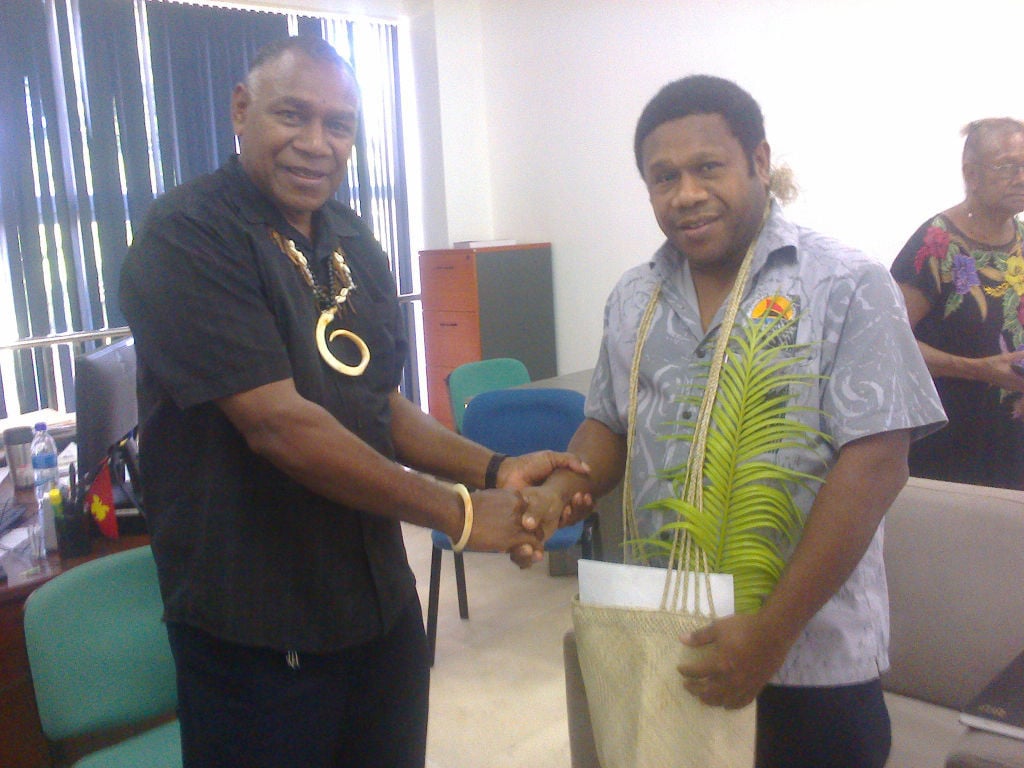 DailyPost – Leaders and members of the Vanuatu-Free West Papua Association (VFWPA) presented a Communiqué to the Deputy Director of the Melanesian Spearhead Group Secretariat (MSG) Mr. Molean Kalpak, requesting him to pass the Communiqué on to the MSG Chair and Leaders to allow West Papua full membership in the MSG and keep Indonesia out of the MSG.
The Vanuatu-West Papua Association Chairman, Pastor Alan Nafuki, and Vice-Chairman who is also President of the Malvatumauri National Council of Chiefs, Chief Tirsupe Seni-Mao, led the Vanuatu- Free West Papua Association delegation to the MSG Headquarters in Port Vila.
Some members of the United Liberation Movement for West Papua (ULMWP) were also present.
The Vice-Chairman of the Vanuatu-Free West Papua Association Chief Tirsupe Seni Mao, presented the Communiqué to the Deputy Director of the MSG Secretariat Mr. Molean Kilepak, in a Vanuatu traditionally woven basket with the namele leaves which is a symbol of peace throughout Vanuatu.
“This Vanuatu Melanesian Traditional Basket symbolizes MSG.
“Placing the Communiqué in it is a call for the MSG (Basket) Leaders to bring into the MSG the West Papua full membership and remove Indonesia out of the Basket (MSG) peacefully.
“We humbly call on you (Mr. Kilepak) to convey this message together with the Communiqué to the Chairman of the MSG and all the MSG leaders before the next MSG Meeting,” said the Vanuatu-Free West Papua Association Vice-Chairman, Chief Tirsupe Seni Mao.
In receiving the Basket, the Namele leaves and the Communiqué, the Deputy Director of the MSG Secretariat Molean Kilepak, said the MSG Secretariat is here to facilitate the work for the MSG, its leaders and members but the decision is not made by the MSG Secretariat but by the MSG Chair and Leaders of the member countries. He told the leaders and members of the VFWPA that the Secretariat will pass the Petition on to the Chair and the leaders.
The Communiqué contains 5 key resolutions passed by the Association in a Communiqué called Owen Hall Communiqué which calls for the MSG to grant full MSG Membership to West Papua and remove Indonesia Membership from the MSG.
Part of the Communiqué reads: “The Meeting was convened at the right time when Melanesian Spearhead Group is considering the full membership ULMWP.
“The meeting called for the removal of Indonesia’s membership of the MSG.
“In the Spirit of solidarity and Partnership, Civil Society Leaders:
“1. RE-AFFIRM our resolve to play a complementary role with the MSG leaders to progress development and improve the lives and wellbeing of Melanesian People.
“2. EXPRESS SOLIDARITY with the MSG of its commitments under the preamble of the MSG Constitution, the 2013 Noumea Communiqué to support the inalienable rights of the people of West Papua towards self-determination and the inclusion of West Papua as an Observer in the MSG at the 2015 MSG Summit.
“3. CALL UPON THE MSG to accept and endorse the full membership of the ULMWP at the 2016 MSG Summit.
“4. FURTHER CALL on the MSG and the Melanesian countries to denounce the ongoing genocide of West Papua Melanesians and colonial rule by Indonesia.
“5. APPEAL TO Pacific Island governments and the International Community for;
“External international intervention into the West Papua emergency situation;recognition and confirmation of ULMWP as rightful leaders of the struggles of West Papua; challenging the Netherlands and the United Nations on legality of Indonesian powers over West Papua; sponsoring of a resolution for the re-unification of West Papua into the United Nations Decolonization list; sponsoring the case of West Papua in the International Court of Justice seeking a judgment on the legality of the 1969 “Act of Free Choice” and supporting the Self-determination and independence of West Papua.”
The Communiqué was dated May 3, 2016 on behalf of participants of the Owen Hall Meeting and signed by; Pastor Alan Nafuki, Chairman Vanuatu Free West Papua Association, Moli Seni Mao Tirsupe, President Malvatumauri Council of Chiefs, Vanuatu, Ms Emele Duituturaga, Executive Director Pacific Islands Association of Non-Government Organizations and Mr. Peter Amdt, Coordinating Team Leader, Australia West Papua Solidarity Movement.
ligo@dailypost.vu